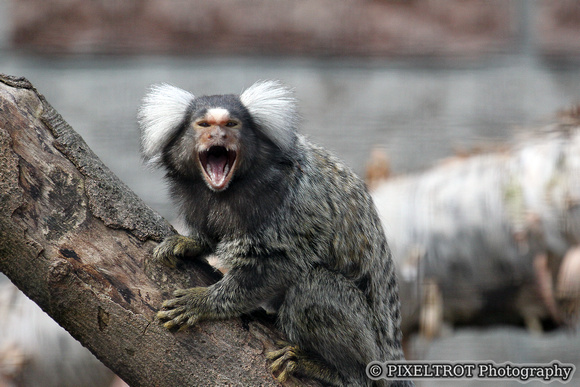 The common marmoset is a New World monkey. It originally lived on the Northeastern coast of Brazil, in the states of Piaui, Paraiba, Ceará, Rio Grande do Norte, Pernambuco, Alagoas and Bahia.

Common marmosets are very small monkeys with relatively long tails. Males and females are of similar size with males being slightly larger. Males have an average height of 188 mm (7.40 in) and females have an average height of 185 mm (7.28 in). Males weigh 256 g (9.03 oz) on average and females weigh 236 g (8.32 oz) on average. The pelage of the marmoset is multicolored, being sprinkled with brown, grey, and yellow. It also has white ear tufts and the tail is banded. Their faces have pale skin and have a white blaze on the forehead. The coats of infants are brown and yellow coats with the ear tuft developing later.
Pixeltrot.com by John Temponeras
Powered by ZENFOLIO User Agreement
Cancel
Continue