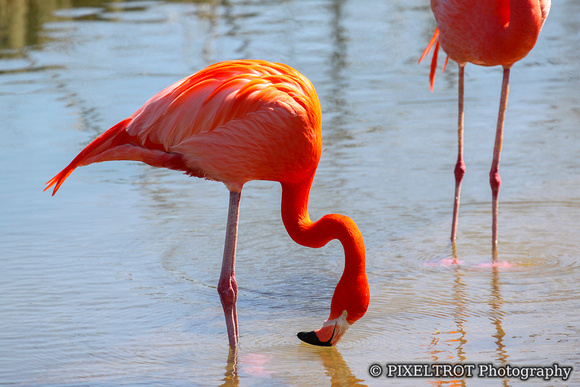 The American Flamingo (Phoenicopterus ruber) is a large species of flamingo closely related to the Greater Flamingo and Chilean Flamingo. It has also been known as the Caribbean Flamingo, but the species' presence in the Galápagos makes that name problematic. It is the only flamingo which naturally inhabits North America.

Like all flamingos, it lays a single chalky white egg on a mud mound, between May and August; incubation until hatching takes from 28 to 32 days; both parents brood the young for a period of up to 6 years when they reach sexual maturity. Their life expectancy of 40 years is one of the longest in birds.

Adult American Flamingoes are smaller on average than Greater Flamingoes but are the largest flamingoes in the Americas. They measure from 120 to 145 cm (47 to 57 in) tall. The males weigh an average of 2.8 kg (6.2 lb), while females average 2.2 kg (4.9 lb). Most of its plumage is pink, giving rise to its earlier name of Rosy Flamingo and differentiating adults from the much paler Greater Flamingo. The wing coverts are red, and the primary and secondary flight feathers are black. The bill is pink and white with a restricted black tip, and the legs are entirely pink. The call is a goose-like honking.
Pixeltrot.com by John Temponeras
Powered by ZENFOLIO User Agreement
Cancel
Continue