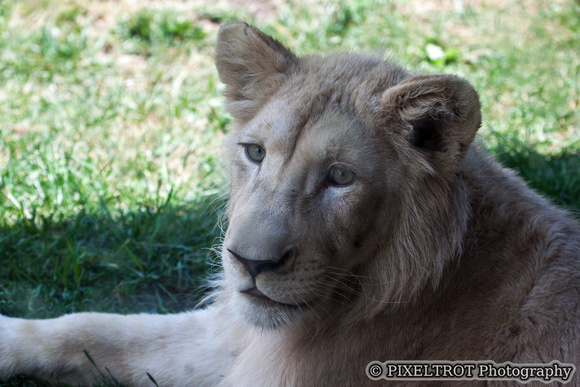 The white lion is a rare colour mutation of the Kruger subspecies of lion (Panthera leo krugeri) found in some wildlife reserves in South Africa and in zoos around the world. White lions are not a separate subspecies and are thought to be indigenous to the Timbavati region of South Africa for centuries, although the earliest recorded sighting in this region was in 1938. Regarded as divine by locals, white lions first came to public attention in the 1970s in Chris McBride's book The White Lions of Timbavati. Up until 2009, when the first pride of white lions was reintroduced to the wild, it was widely believed that the white lion could not survive in the wild. It is for this reason that a large part of the population of white lions now reside in zoos.

White lions are not albinos. Their white colour is caused by a recessive gene known as the color inhibitor gene, distinct from the albinism gene. They vary from blonde to near-white. This coloration does not appear to disadvantage their survival. The white lions of the Global White Lion Protection Trust (GWLPT) have been reintroduced into their natural habitat and have been hunting and breeding successfully without human intervention for a significant amount of time. White lions in South Africa are currently being bred almost exclusively for hunting, but Linda Tucker (the founder of GWLP and author of The Mystery of the White Lions) and her team are trying to change the South African hunting laws
Pixeltrot.com by John Temponeras
Powered by ZENFOLIO User Agreement
Cancel
Continue