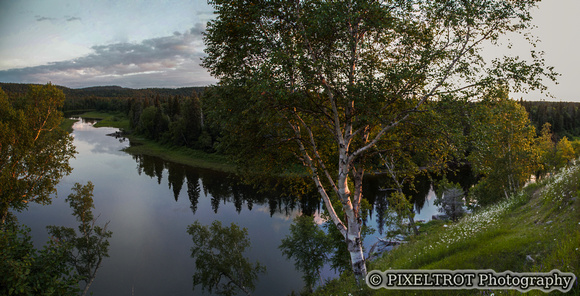 The Michipicoten River is a river in the Algoma District of northern Ontario, Canada, which flows from Dog Lake and joins with the Magpie River to empty into Michipicoten Bay on Lake Superior near the town of Wawa.

This river is 113 km (70 mi) in length (including Lochalsh River to the outlet of Wabatongushi Lake) and drains an area of about 5,200 km2 (2,000 sq mi). The river's name means "big bluffs" in Ojibwe and refers to the large hills located near the river's mouth. From the outlet of Dog Lake, the Michipicoten River flows south through a series of large lakes: Manitowik and Whitefish Lakes. Then it flows mostly west to Lake Superior. There are four hydroelectric generating stations on this last section of the river (operated by Brookfield Power Inc.).
Pixeltrot.com by John Temponeras
Powered by ZENFOLIO User Agreement
Cancel
Continue