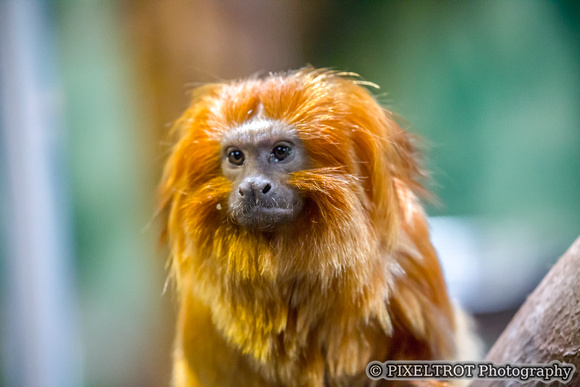 The golden lion tamarin also known as the golden marmoset, is a small New World monkey of the family Callitrichidae. Native to the Atlantic coastal forests of Brazil, the golden lion tamarin is an endangered species with an estimated wild population of approximately 1,000 individuals spread between 3 different locations along southeastern Brazil, and a captive population maintained at approximately 490 individuals among 150 zoos.

The golden lion tamarin gets its name from its bright reddish orange pelage and the extra long hairs around the face and ears which give it a distinctive mane. Its face is dark and hairless. It is believed that the tamarin gets its hair color from sunlight and carotenoids in its food. The golden lion tamarin is the largest of the callitrichines. It is typically around 261 mm (10.3 in) and weighs around 620 g (1.4 lb). There is almost no size difference between males and females. As with all New World monkeys, the golden lion tamarin has tegulae, which are claw-like nails, instead of ungulae or flat nails found in all other primates, including humans. Tegulae enable tamarins to cling to the sides of tree trunks. It may also move quadrupedally along the small branches, whether through walking, running, leaping or bounding.
Pixeltrot.com by John Temponeras
Powered by ZENFOLIO User Agreement
Cancel
Continue